Marvel do it again, with laughs

Life is really serious, isn't it? Gas is going mental, politicians are doom-mongers and the world is definitely heating up because of humanity's combined flatulence. Don't we need some raw fun and entertainment? Yes. So, ignore any dull grump that ushers you away from this film and embrace its pure value.

There's something magical about comic movie franchises and none are more special than the Marvel portfolio. They have broad appeal and are beyond self-aware of their virtues. Where the previous titles have recently succeeded, Thor: The Dark World has followed suit. It's entertaining, funny and charming - but not without its gaping flaws, its plot is thin and lumpy.

Perhaps paranoid that it needed to have enough humour to match Avengers Assemble and Iron Man 3 the producer Kevin Feige, and his director Alan Taylor, clearly did all they could to splice the funny scenes into the final cut. And they did so. Rarely in a media screening, packed full of sullen-faced film critics [cynics] will you hear a rapture of laughter. From the naked dancing of Erik Selvig (Stellan Skarsgård) to Thor hanging his hammer on a clothes peg, the laughs abound. Some critics are likely to work themselves into quite a rage about the level of humour.

Be aware, this movie is funny. It's almost too funny and Marvel should be mindful that, should the third movie be even more so, they risk turning their entire stable of titles into parodies. We, like you, have our fingers crossed that doesn't happen.

Fortunately, we weren't repulsed by the laughs, as they're needed to balance the escalation of imagination. This second movie is far darker than the first. With Thor and his crew mopping up Loki's chaos, Asgard flexes its muscles to restore peace. Little do they know they are not so untouchable. The antagonistic element arrives with the Dark Elves: a race of beings that share an equally long and powerful history as the Asgardians. Their ideal universe would be one filled with darkness, where no beings of light exist. They are also decked out with some awesome tools of war. (Look out for the implosion grenades.)

It was thousands of years before that they lost their first war to turn existence to darkness. Fuelled by crazed magma-induced suicide soldiers and a mysterious dark matter called Aether, they got very close to destroying light as Thor knows it. But they were defeated by Odin's father, Bor. The remainder of their kind forced into hibernation and exile. Now, marshalled by their survived militant and villainous leader Malekith (Christopher Eccleston), they are bent on finishing the work they began.

This instalment is ambitious in its tour through the nine realms. The team behind the movie clearly wanted to explore the Worlds discussed in the previous movie. In fact, the first dozen minutes are a dizzying flurry of back story, new planets and side-stories. Whilst, at first, it's difficult to keep track, the groundwork is essential to bind the tissue-paper plot.

What's critical once again to the movie, however, is the dynamic between the powerful Princes. Loki, imprisoned for his sins, his unresolved evil streak becomes central to the movie. Thor will, once again, turn to his brother for help.

The cast is relatively unchanged, with each dancing around their lines with little effort. It's all kept simple, as if they are letting the "ball do the work". As Chris Hemsworth said in the press conference to many a laugh- "I remember Hopkins said something to me the first day on set in Thor 1…we had the whole outfits on, the eye patch and everything, he said to me: So, no acting required here."

Our only gripe is with the movie's continuity. Malekith is bent on destroying the universe and got so very close, a few thousand years ago, on his own planet. This time around, he doesn't do what an evil-genius general would do. No, he does something inexplicable - although Dr. Selvig does try to explain it - this time he needs to head to Greenwich, London, to achieve his aim. Whilst we won't spoil the reasons why, we fear that the movie-making tax credits offered to Hollywood may have unduly influenced the evolution of this entertaining story. Whilst we all want to see the amazing backdrop of London dominate more movies, it shouldn't do so at the expense of the movie's credibility. But this is a comic.

With rich, beautifully conceived environments, a foe that's evil, powerful and menacing, action that delights and entertains; Thor: The Dark World trumps its predecessor. And as the tapestry becomes all the more complex, so does the script compensate with jokes, tickles and laughs. Marvel are a brand that trade in the ridiculous, they conjure dreams and sell them with explosions, special effects and cloaks. None of it would work if they didn't allow humour to course through the veins of their franchises. They know that all too well. In some perverse way, humour is the sibling of the fantasy and, just as Loki and Thor's relationship is pivotal, this movie would not work without such balance. Any funnier, though, and they'll need to bring in Will Ferrell. 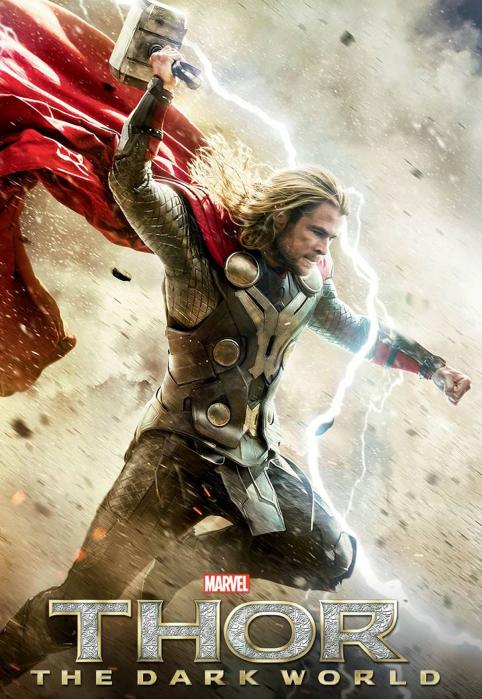 Don't leave the cinema early. True to form, Marvel have bolted on a sneak peak of the next Thor movie. This snippet features none other than Benicio Del Toro as The Collector. He's seemingly on a sly, underhand, mission to collect all of the so-called "infinity stones". Those being the blue one and the red one you see in this movie... Enjoy. Although, what happens next is anyone's guess.