"You keep what you kill" has a rather nice ring to it, doesn't it? And that was almost the case for David Twohy, the director of both the previous Riddick Universe outings - because we've been waiting nine years to see this trilogy continued. If you could call it a trilogy and not smirk. Yes, antihero Richard D. ("Dick")[not really] Riddick returns and what a surprisingly pleasurable one it is, too. Packed with more gore, action, laughs, dozens of brilliant one liners, and even a spot of domestication. It's like meeting an old friend. 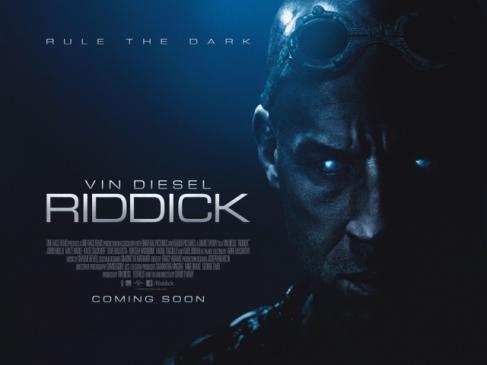 Riddick, already the accidental leader of a soulless army of Necromongers, is set to fight for his life once more. He's now bent on finding the remnants of his once-proud homeworld. And sets out on a quest to find its location - erased by the man whose head he knifed. But true to form, those necros don't suffer him for long and their coup rather skilfully sidesteps us into this third tale - the dully titled, Riddick.

He's on a nameless world [Un-Furia], it's going to get dark again, and when it rains thousands scary-ass aliens that are living in hibernation, hiding in mud under the ground, are due spring out and eat everything. (For no particular reason, again.)

You've had the darkness from the cult, low budget and impressive, Pitch Black (2000); then came the hit and miss epic battles of big budget trappings in The Chronicles of Riddick (2004) - where the beasties were people, and the darkness was of the more metaphorical variety, and Judy Dench played a see-through alien. We're back to the same old story - tried and tested. Riddick's going to have to go "all animal" to beat the rain-cake aliens and a team of mercs he purposefully summons to give him a ship off the rock. And go animal he does.

Another richly considered sci-fi environment is backed by a more colourful and elaborate plot build up. Having glimpsed Riddick's residual humanity in the last two movies, this time, he's the RSPCA's best friend. His first few days on the sunny side of the planet culminate in him rearing a pet. And one that makes a Bullmastiff look like a toy dog. It's only when he stumbles across an abandoned merc outpost that he's able to plan his escape. And just in the nick of time, too. Just after the two merc teams arrive - bent on finally nailing the mouth-wateringly large bounty - the rain starts to fall and the beasties stir. Their rivalry and ongoing butting of heads is replaced by the risk of the removal of them. Death, dazzling special affects and a simple, methodical plot tumble forward.

Step up Vin Diesel once more for pulling off the role you were born for - this portrayal of Riddick is better, more refined and wittier. The anger is replaced with a far more visceral cunning. And to Dahl (Katee Sackhoff) we tip our hat. The actress that blasted to greater fame as Starbuck swings into action as a tough-talking, tough-hitting merc. And one with a bi-sexual appeal that may be worthy of fantasy. The final nod goes to the writers, for achieving continuity after all these years and delivering that rarity: A good sci-fi/action movie. Hats off to Twohy, he's produced entertainment.

Whilst many may recall Pitch Black and sense the similarities, this feels less like a copy, more akin to an evolution. It's polished, classier than its predecessors. Because for all the ambition of The Chronicles of Riddick, it went to big, too quickly. We liked it, but then, you'll find something of merit in virtually any film. It doesn't mean it's good.

In many ways, as Dick Riddick carves his way through another crew of hapless mercs, cleaving off hundreds of alien heads en route, his story is being rebooted. So subtle is that process, that when the credits roll at the end, you might just find yourself smiling and open to the hope that Twohy makes another one.

Let's hope that next time he learns his lesson and dials up the ambition to an appropriate degree - then we're in. All in.