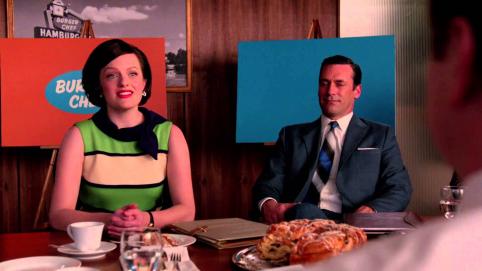 What better way of celebrating the launch of the iconic TV series Mad Men, then a commemorative Mad Men burger at Honest Burgers nine great outlets in and around London.

Seriously, if you’ve yet to see the show, then you are obviously going to need to buy it on DVD or Blu-ray later this month and binge-watch it as soon as you possibly can.

What is perhaps more exciting, particularly for those that have already seen it, is the thought of celebrating Mad Men: The Final Season - Part 2 and Mad Men: The Complete Final Season by chomping into a Ginger Pig dry-aged beef patty, twice smoked bacon, Monterey Jack cheese, pickles and dipped-fried onions.

“What’s more, in honour of the legendary Don Draper and befitting of a burger that pays tribute to one of the most iconic series in TV history, the BBQ sauce lavished on the burger is made from the finest Buffalo Trace bourbon,” Lionsgate Home Entertainment’s press release proudly states!

“Reflecting on the relationship in the series between the ad men of Stirling Cooper and fast food chain Burger Chef, the partnership heralds the final part of Season 7 (and the complete Season 7 box set) arriving on Blu-ray and DVD from October 19th, with support across Lionsgate and Honest Burgers’ social channels as well as being promoted in restaurants and at an exclusive celebration on October 19th at Honest Burgers’ Kings Cross branch.

What’s more, fans of the show can tweet a picture of their burger along with the hashtag #MadMenDVD to be in with a chance of winning a copy of the limited Deluxe Collector’s Edition box set – so channel your inner Don or Joan to really stand out!”

Dan Gilson, senior product manager at Lionsgate Home Entertainment, said: “Mad Men, and its fans, has always been the epitome of class and good taste so a partnership with Honest Burgers, who’ve built their reputation on the same standards, makes perfect sense. It’s also a fitting way to mark the conclusion, and arrival on Blu-ray and DVD of what is arguably one of the most celebrated series of recent years.”

Tom Barton, co-founder of Honest Burgers, said: “Collaborations are a great chance for us to play around with different flavours, so when Mad Men came along we knew it had to have a bourbon influence. I just hope I've done Don Draper proud.”