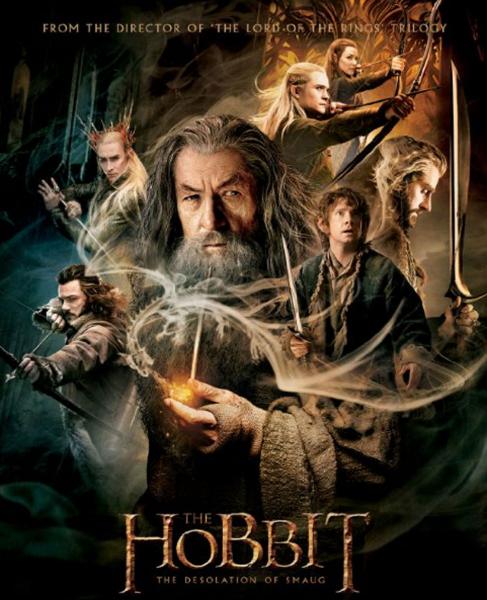 He has a whole lot of tricks in his pocket...

It's now the fifth time that Jackson-does-Tolkien has graced the cinema screens and, in spite of critical gripes for its predecessor, this latest instalment is brimming with qualities. The Hobbit: The Desolation of Smaug (The Hobbit II) could, in fact, be Jackson's best work yet in this genre. With fair but brutal elves, giant spiders, battle-ready Orcs, diligent loyalty to the book and a fascinating encounter with a terrifying dragon, The Desolation of Smaug surely has a richer tapestry than any of its kin. Tying it all together is the mature and engaging performance of Martin Freeman, as Bilbo.

Such a louder "wow" must, at last, quieten the incessant naysayers and purists that have blighted the critical landscape for this entire Tolkien re-imagining. Just as The Lord of The Rings began slowly and picked up pace, so has Bilbo. We join a changed, more confident, Bilbo and the pack of Dwarves just after they've been dropped off by the friendly eagles. Remember: the ones that could have given them a lift all the way there? Orcs are still in hot pursuit and dark forces are mustering. Thorin's grim fellowship still has far to travel. Venturing through the Mirkwood and on to their goal, the Misty Mountain.

Now, it may be a while, if ever, since you've read the tome this latest Tolkienian trilogy is based upon. Much was made of Jackson's decision to slice it up into three respective chunks. But revisiting the book does remind you that the big screen has been incredibly loyal to the storyline - modernising where appropriate and embellishing where reasonable. Whilst the first edition was laboured in places, the second manages to knit the affair together with added fluidity. In typical form, Jackson mingles detailed nods to the book's prose with his own parachutes of his own imagination. Happily, these additions work to greater degree than they did in the previous five Middle-Earth outings. Whilst this edition does comfortably break through time-zones, it manages to hold your attention keenly. It also leaves you literally sobbing to see what happens next. One wonders whether, when it's all over and there's nought but The Silmarillion left to make, with it's biblical tedium, many a critic will realise what they had which is gone.

The inclusion of Beorn, complete with his massive bear-like form and beehives offers a tantalising glimpse to the detail embraced from the book. But it is the Elvish adventure in Mirkwood - and Gandalf's side story - that impresses most. From Bilbo's treetop view, complete with the book's butterflies in the forest canopy, to the incredibly terrifying nest of spiders, the story's encounter with darker elves lights up the film. Even the detail of the Elvish gate is identikit to Tolkein's own drawing. It is Lord Thranduil's elves that allows Jackson to again use a love story to balance all the macho action - with the gracefully skilful Tauriel (Evangaline Lilly of Lost) and Kili itching for someone to grab a yellow pages and sling it their way. It's a relief and a thread that places Tauriel to the hypotenuse of the love triangle and Legolas to its side. Besides the fair delights of their city, these elves look more warlike and worldly than Elrond's well-brushed mane. Even Legolas gets a scornful, serious and palatable makeover. Phew.

But the scene that ignites the movie, and turns on the hyperdrive, is based on the chapter 'Barrels out of Bond'. It also happens to be one of the most spectacular sequences of film you'll see, ever, perhaps. And a great compliment to Tolkien that his rather tame equivalent has been juiced up to include a double chase that showcases the skill of the elves and the new brutish threat of the orcs.

Bard, the heir of Girion (you know, the chap that loosened one of Smaug's scales), is introduced. His role and the significance of Lake-Town will be brilliant to see in the last of the latest three. And Jackson has sought to promote his prominence whilst introducing the "fishy" Lake-Town - a wonderful stage. Yes, Jackson has liberally invented whole sequences - but they are spectacular homages all based upon the scaffold of a book written an awfully long time ago. They're a modern interpretation. Equally, where previous Jackson treatments may have frustrated, dare I say it, this time it's improved the story.

One cannot deny the power of film. It's through a single pair of brackets in The Hobbit's many pages where Jackson has seen an opportunity to make sense of the bigger strategic picture. Revealing his grand strategy to tether two trilogies together - a feat that Star Wars fell some way short of achieving. We are, of course, talking of Sauron's return and Gandalf's knowledge of it.

Tolkein only touches upon Gandalf's departure - to fight with his fellow wizards agains "The Necromancer". Jackson goes the whole hog and turns those brackets into everything he needs to setup The Lord of The Rings. What The Hobbit can do, you see, which The Lord of The Rings and even Tolkien could not, is join the dots. Map the rumbling rise of the menace that was The Great Eye. And we're left once more with a locked up Gandalf watching an army of mega-Goblins and Orcs trudge off to war in the East. And Jackson must be saluted for keeping his style and techniques closely aligned to his previous work.

Having feasted on the visually delightful Erebor - the City Under The Mountain - shaken as Benedict Cumberbatch's Smaug plays the fabulous British Villain, the cliffhangers stack up across the board. We leave this latest instalment not knowing if Bilbo nabbed the Arkenstone from the quite terrifying beast, said angry dragon headed for Lake-Town, where Bard is locked up and his only weapon to kill the beast hidden in a fishing boat.

We'd wager that this is all setting up wonderfully for the Battle of the Five Armies. And Jackson has three hours to play with that and resolve Sauron's temporary defeat and subsequent journey to his Mordor home for the war in the west.. If you thought the siege of Gondor was good to watch, your lips will be champing to see how Jackson signs off around the slopes of The Lonely Mountain - complete with a Dwarf battalion, Silvan Elf warriors and Bard's gang of fisherman-warriors. Something tells us the next one will go out with a bang. In the meantime, bravo.