Did you know he can flap his fists one hundred times a second? (Plausible, right?) 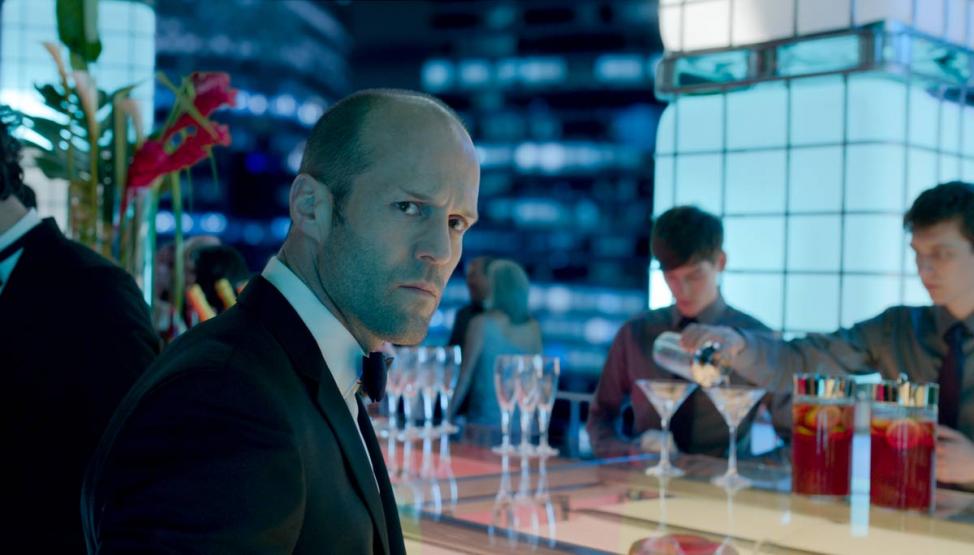 "You could fall in love with an orang-utan in that!" That was the line that made Jason Statham's Hollywood explosion catch. And the tough guy martial artist has a lot to thank Guy Ritchie for. Since making it, he's dated some exceptionally beautiful women (Hungtinton-Schwing) and filled a hole in Hollywood's action-man portfolio. Most notable was his recent brain-off, fists-on stint as the good gangster, Parker. But it's being a good guy that suits this man best and in Hummingbird, he's had the chance to lend his skills to a more cerebral affair. This hard nut can act.

Tell us a little about the lead character, Joey, in Hummingbird:

He’s running away from something he did in the army, something that affected him to such a degree that he can’t live with himself, so he decides to carve a life for himself out on the street where he doesn’t have to explain himself. He’s not trying to be forgiven, and that’s where we find him.

You were keen to be involved the minute you read the script, what was it about Steven Knight’s story that really drew you in?

It’s such a unique story, it’s about two people that share a dark secret, and yet they are from such a different place, and yet it’s like two ships that pass in the night and you can open yourself up to somebody that you know you may never see again and you share such intimacy. I think there’s something very unique in that.

Could you tell us a little bit about the title of the film?

Hummingbird; a Hummingbird is a military drone that sees things and relays information back to a particular point.

You are almost unrecognisable in those scenes with the long hair and beaten face, much apart from the tough man image we’re used to - what did you relish about the different looks of this; was it long in hair and make-up?

I think it was important; a man that has lost all desire to keep himself looking in a particular way, he’s on the run, he’s avoiding a court-martial so it’s as much of a disguise as it is something that plays a part of a man that really doesn’t care too much anymore. He’s trying to blend in, he’s trying not to draw any attention to himself.

And Vicky McClure of course, a British actress, close to our hearts from her performance in This is England, you have some pretty fierce scenes with her, it’s safe to say, what were the dynamics there? With your reputation as a tough guy, what was it like in that supermarket scene, having those tins thrown at you?

Vicky is such a respected actress and people would love an opportunity to work with somebody like that, it’s just great that Steve Knight can attract such great talent and I think it’s all in the writing, it’s all in the characters that he puts together and the fact that we got Vicky was something really special. It just gives you the right reasons, the weight that you need - it’s such an important part of the story for Joey, that relationship and how it never worked but he wanted it to work and they share a child – it’s real life stuff.

And you mentioned there, Oscar-nominated screenwriter Steven Knight, he’s said to create a calm and supporting atmosphere on set, in what ways does it benefit having the writer and the director at the helm?

It’s the best thing, for me there’s no substitute. It’s a one man vision, there is no ambiguity about the interpretation of someone’s idea and how that ends up on the screen, this is so clear, it’s really crystal clear. It’s unusual to be able to get that, it really is.

You’re famous for doing your own stunts; Steven Knight has said that you have the skills to transform a complicated fight sequence to make it look completely real, how much do you enjoy about the role and violent, kick-ass fights?

I really enjoy them obviously because a lot of the characters I play have a physical role to play within themselves and the physicality of Joey Jones is very important. He’s a soldier, they learn skills, they learn how to fight, so if you don’t have those in your arsenal, then it’s very difficult to learn how to pretend to do that stuff. You have to have a lot of years behind you and a lot of training. I really enjoy that aspect of filmmaking, it looks serious but it’s a lot of fun when you end up doing it – it’s ridiculous at times.

Have you ever encountered any injuries over the years with your stunts?

Yeah, I’m always getting banged around. It’s expected now. It’s part of the job. Cole miners get dirty, I get hurt.

Some of my favourite scenes are on the rooftops over the stunning London scenery, namely the skipping scene when you’re on the roof looking over Covent Garden and also on the city building looking over the Thames; how was it filming those scenes? I take it you don’t suffer from vertigo?

No I don’t suffer from vertigo. It’s really great to see the landscape of London; to capture that with a great cinematographer like Chris Mengez - what he puts together, and then you get the beautiful addition of Dario Marianelli with the sound; all these people are so talented... Everyone is really proud of what we did, especially me.

Your writer Steven Knight showed us a very gritty, underbelly of London in his screenplay for Eastern Promises, and I do think as you say that the city looks different, more different than I’ve ever seen it on-screen in this film. How would you describe the London that is depicted in Hummingbird?

Well it’s part of the fabric of the story, the homeless world is part of that, and Sister Christina works for the mission that is feeding these people, that [London] is an essential character itself in the story of Hummingbird.

You’ve starred in many films, across the world, what is the most enjoyable thing about shooting in London?

It was just great to be home and in an environment that people are doing films that don’t have all this excessive amount of waste and money that just goes down into areas that are just... it’s just so silly to see how some things get done in different parts of the world. You come back at home, you make a film in London and it’s like a football team, it has a different feeling, it really does.

Hummingbird is out on Blu-ray and DVD on 21st October.

Buy on DVD (we "won't" earn any commission. #Winkyface)