...And Hollywood is coming for those Wikileaks dollars, whatever the motive. 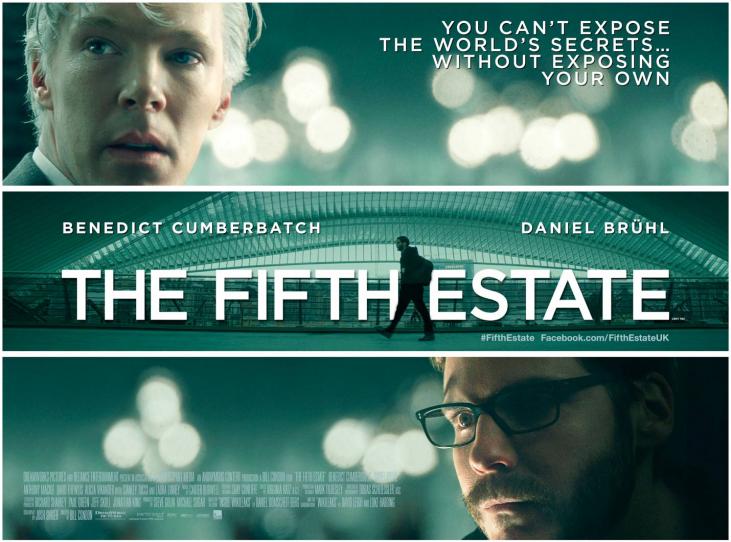 Since the Wikileaks founder, Julian Assange, has been living in the London Ecuadorian embassy for a little over a year now, it seemed opportune to cover this massive movie now. Whilst the UK-market poster and trailer are only just being promoted, the trailer for the hotly anticipated Wikileaks movie, The Fifth Estate, has drifted around the internet for over a month. And what coverage it has received! Because this is one story the media loves. (Ignoring the fact he may be a rapist.) We ducked out first time round.

That's because Assange is, for us, a highly divisive figure whom we struggle to define. A man of two personalities, seemingly. This movie presents the third attempt to sensationalise or document his burgeoning legacy, one that's unresolved. The others, of course, being: We Steal Secrets, a US-made documentary; Underground: The Julian Assange Story, made by Australia's Network Ten.

His work, and the truths his organisation uncovered, remain undeniably game-changing - highlighting the power the digital age could wield against "the machines of State". But it's his actions that surprise. And they're are mirrored by others in this so-called "fifth estate". Dare we mention them: Anonymous. Exacting direct action across the ether without so much as a figurehead. It seems that the Fifth Estate demands accountability, seceding from any institution of accountability. And that, to some, might represent a risk in itself. Because a "like" or a "retweet" have no capability to enforce their democratic will.

Who wants to rub their burns in paraffin after jumping from the frying-pan if you're only to be set ablaze all the worse by the fire?

Assange is beginning to look less like an activist and more like an anarchist. Bearing in mind that true anarchy recognises no system. An inherently selfish ideology in itself - it yields to no hierarchy. And one can see that yielding to no hierarchy may also mean avoidance of that hierarchy's laws.

Many activists have suffered hardship and must indeed risk martyrdom for their cause. They seek changes to the organisation and laws of the hierarchy. Depending on the degree of their action, to change laws, often they must first break them and face the punishment that ensues. Otherwise, they tirelessly campaign. And they've been pretty successful in history - managing to abolish dictatorships, slavery and discriminations.

But all activism comes with consequence, whether it's direct action or political posturing, because a hierarchy doesn't change easily. In fact, it can be down right aggressive in its urge to maintain status quo. To avoid that consequence is to embrace selfishness. Selflessness proves itself to be the more potent catalyst of ideological change.

Ghandi suffered terrible hardship; Emily Davison stepped in front of a horse for the vote, having already been incarcerated multiple times; William Wilberforce risked political bankruptcy motioning against slavery; Nelson Mandela endured years of incarceration; Aung San Suu Kyi lived under house arrest for 15 years; even in Russia, Mikhail Khodorkovsky was one of a few power-players to remain and face the consequences of defying Putin's Russia. (Whether he was equally as guilty as the aforementioned is only the expert's guess - so blurred is Russia's status quo.)

Does the message stand? If you're innocent, pure, if your mission is of value, then shouldn't you be prepared to defeat your punishment. History says yes: You must risk sacrifice. You must accept the wrath of the hierarchy to highlight its flaws. You must face superior forces and battle them with will alone - a resolve to change the world for the better. Thus, your defiance becomes magnified in the eyes of the observer and traction is gained.

Has Assange? Have other members of the the Fifth Estate? Isn't a rape charge detrimental to that undoubted purity of the original mission Assange has already embarked upon?

With Edward Snowdon recently dropping, perhaps, the largest societal warhead in history, Assange sets and actively promotes a dangerous precedent: Flee and hide. And flee Snowdon has - to Chinese territory, then Russian. (Both low on your average US-voter's list of best-friend allies.) With that flight may seep much of the wonderful credibility of his revelations. Because if his character was not selfless - how could his be a cause to consider Nobel? And so the tale continues.

Unfortunately, most of history's great activists didn't have the heinous charge of "rape" hanging over their head. And few more incendiary and indelible charges could indeed exist in this increasingly feminist Western world. As well as fighting his "principal" crime - that of punching US hegemony on the nose too many times - Assange now has the irritation of having to clear his name of rape allegations. If he does so, he also risks being extradited to the US - where he fears lethal injection could be levied. He's still hiding. Hoping to look like a true hero. But does he? He's still innocent until proven guilty. One struggles to justify his actions as protecting Wikileak's legacy, especially in the face of such a serious accusation as rape.

Assange seems to view himself as a refugee, fleeing to exile, much like the Dalai Lama from his homeland. For a man in Assange's position, it may be all the more critical that he face the charges levied upon him in Sweden. Yes, there may be a conspiracy (there sometimes is!), but that's not the issue. The issue is the mission. If he truly were interested in the betterment of society, and not fuelled by the curse of loving his own reflection, he probably wouldn't have walked into the Ecuadorian embassy last June. Where he remains, withering away the value of the risks taken by Bradley [Chelsea] Manning and many other faceless operatives.

And this is where The Fifth Estate will be a fascinating tale. It's the first film, thriller or documentary aside, to have some serious paper behind it. And it's a tale that's going to use creative license. The top team comprises of The West Wing writer Josh Singer adapting the screenplay, Bill Condon (Dreamgirls) directing and Benedict Cumberbatch starring as Assange. Based on the book written by Assange's former cohort, Daniel Domscheit-Berg, the subject matter appears balanced, but unflattering. They didn't end amicably. And Assange has already dubbed it a, "massive propaganda attack on WikiLeaks and the character of my staff".

So he has his notoriety, there's no such thing as bad press. With The Guardian's revelations that Big Brother was watching, Assange's mission has been vindicated. All that's missing is the institutions of human rights waving their flags for Assange, the Australian stepping up and fighting his charges, and Shami Chakrabarti camping out on Question Time demanding his release. But rape charges will do that to a could-be martyr's reputation - people want resolution, faith is not enough.

As for the movie. It's just that. A tale with some height applied to it. We have a feeling you'll be entertained. Because there are few modern tales that are more confusing, provocative and poignant as this. And Cumberbatch looks like he's acted the best out of it.

Somehow, with Hollywood involved, Big Brother wired into the internet and the NSA out to defeat those that have exposed their dirty underwear, we don't think this movie is going to help clear the mess up. The best thing you can hope for, is that, somewhere out there, it sets a true hero's imagination wild.

Perhaps Wikileaks really was a case of: Right mission, wrong person. History will answer that question, the movie will stoke the fire.

For those with interest:

The First Estate comprises of those members of the clergy.

The Second Estate comprises of those members of the nobility

The Fifth Estate? Likely the globalised forces that use the internet and digital structures to exert influence over the previous four estates.