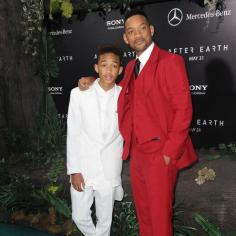 The comedy film which was directed by 12 people - including Peter Farrelly who co-produced - also picked up Worst Screenplay and Worst Director.

Will Smith and his son Jaden - who he has with wife Jada Pinkett Smith - took home three Razzies for 'After Earth'.

Worst Actress went to Tyler Perry who starred as Mabel 'Madea' Simmons in 'A Madea Christmas' and Worst Supporting Actress was given to reality star Kim Kardashian for her role in 'Temptation: Confessions of a Marriage Counselor'.

The film received negative reviews in the United States and was a commercial failure, grossing $260 million worldwide, against an estimated $225 million production budget.

However, it has been recognised for visual effects and makeup, and was nominated for Best Makeup and Hairstyling at the 86th Academy Awards.

Worst Supporting Actor - Will Smith on 'After Earth'

Worst Screen Combo - Jaden Smith and Will Smith on 'Planet Nepotism, After Earth'