The star of the show talks to Blokely

War Horse, one of London's top productions, received rave reviews long before Steven Spielberg unveiled his cinema version. We went to The National Theatre to catch up with rising star Robert Emms (pictured right) to talk about the play, the film and chilling out with Mr Spielberg.

For those who may not know, just give us a synopsis of War Horse and your role.
The play is set at the outbreak of World War One. Joey, Albert Narracott's horse, is sold to the cavalry and shipped to France. He's soon caught up in enemy fire and fate takes him on a journey, serving on both sides before finding himself alone in no-man's land. Albert cannot forget Joey and, still not old enough to enlist, he lies about his age to join the army. In the play I played Albert and in the film I play David Lyons who is the son of the Narracott's rivals.

Why should us blokes go and see it?
The play has lots of themes in it that will speak to everyone; it's a kind of universal idea that everyone can connect to. It starts in the farming community of Devon and then goes right through the First World War. The story is very action packed and I think that is a very appealing side to it.

We perceived it as a kind of buddy movie?
Yeah, exactly that - it does have similarities.

What's the main reason for its success? (War Horse has won Olivier, Evening Standard and Critics' Circle Awards)
I think it's down to the commitment and dedication of a group of actors and puppeteers working together to create this story. The horses are something that have revolutionised puppetry. They are amazing. So life-like and the audience end up not only believing that it is a horse but feel for it as well.

Very diplomatic! The horses are a unique element but did they present any problems or were they a good vehicle for creativity?
Obviously, using a puppet to create a life-size horse can present problems but with this it really works. It's done in such a way that you accept that they are puppets but choose to believe it's a horse because of the manipulation of the puppeteers and the design.

You were cast in Steven Spielberg's movie adaptation. How did that feel?
Of course, it's an amazing feeling to be cast in a Steven Spielberg film, a real boost to my confidence and a great learning experience. He also said he'd give me a reference!

Did he call you? How did you find out about being cast?
I was in the play when Steven came to see it and he asked to meet me after and we chatted about the story and what other stuff I had done. I just joined him on the stage! I didn't hear back from him and didn't expect to. But a month later my agent got a call asking if I would like to play the part of David Lyons, who is one of Albert's rivals, so obviously I had to say yes. I was expecting to have to go and audition for it but I was very lucky that it was just a straight offer for the part. 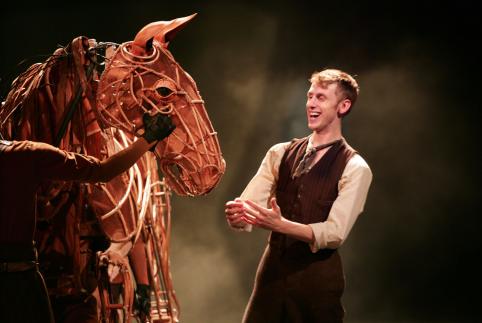 That's amazing. We know you've done some commendable TV work but a Spielberg film is a huge event. Do you see this as your big step into the movie industry?
This is a big step, yeah. When I finished the play a year ago [when it was showing at The National Theatre] I went on to do a Roland Emmerich film, called Anonymous about the lives of Shakespeare and The Earl of Oxford. And before the War Horse movie, I did an independent film called The Arbor, about the life of the late playwrite Andrea Dunbar. It was done on a shoestring budget but won numerous awards at Tribeca and the London Film Festival.

Having been in the stage production did you have a sense of protection over the original material?
I think the film and the stage play exist in their own ways. They're two completely different mediums. They are in no way competition. Hopefully one complements the other! The film has real horses and the play has created the horses through puppetry so obviously they're very different ways of telling the story

The BFI has now effectively taken over funding the British film industry. Is that a good move or not, considering the success of British filmmaking over the past few years?
I think it's great. Any way of getting more money put into the British industry is a good thing. There are so many talented British filmmakers out there that need funding.

What else is in the pipeline for you?
I am travelling over to LA for a few months to meet people over there but I have a film coming up next year. It's a coming-of-age film about three young guys in the early '90s. And I'm playing a serial killer in a TV drama Scott And Bailey.