The Strange Case Of...

Dean Reed looked like an all-American boy. Born and raised in the thin, clean air of Denver, Colorado, when he had a guitar in his hand he could have passed for a Beach Boy. But Dean Reed never made it big in the US. The USSR, on the other hand...

If you were a young person in an Eastern Bloc or South American country during the 1960s and '70s not only would you have known who Dean Reed was but, the chances are, you'd have seen most of films and owned several of his records. The first American-born artist to tour the Soviet Union, Reed was a sort of Second World Elvis - with a dash of James Dean thrown in for good measure. Yes, back in the day, he was the five year plan-liking, tractor-admiring, Politburo-approved answer to such examples of Western decadence as The Beatles and The Stones.

Reed's gigantic jump to the left occurred when a single he recorded for Capitol Records - Our Summer Romance - took off in Latin America in the late '50s. Sent south to cash in on this unexpected success, the 20-year-old was greeted by the sort of hysteria other parts of the world reserved for The Beatles. As if this wasn't dizzying enough, Reed also became keenly aware of the suffering that many Latinos had to endure, much of it because of US-approved policies. Having arrived on the continent a fresh-faced teenybopper, Dean Reed soon became so passionate a supporter of the rights issues in Chile, Peru and Bolivia, he found himself kicked out of Argentina and forced to make a home for himself in Italy.

In Europe, Reed's fame would take on an exciting new dimension as the singer embraced movie acting. Besides starring opposite Yul Brynner in the spaghetti western Adios, Sabata (aka The Bounty Hunters), he appeared in some 20 comedies, musicals and action pictures. He also continued to record, much to the delight of his fans in South America and the Warsaw Pact countries. With a 1966 tour of the USSR a rival to the Beatles' US invasion of 1964 in terms of both sales and crowd reaction, Reed - who'd remain a US citizen throughout all the while he lived behind the Iron Curtain - made himself at home in East Germany. It was here that he was interviewed by American magazine programme 60 Minutes in 1986, a conversation that famously saw him profess his love for his homeland while comparing Ronald Reagan to Joseph Stallin. Reed would also tell Mike Wallace that, contrary to the belief of many Americans, the Berlin Wall had been constructed in an act of self-defence. 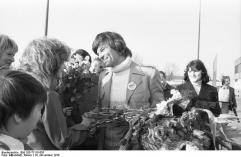 The 60 Minutes debacle resulted in Dean Reed being widely described as both a nut and a communist (he actually preferred to describe himself as a Marxist). As for those who believed the entertainer was a traitor, they mightn't have been so wide of the mark, what with Reed apparently having worked for the East German secret police, the Stasi, between 1976 and 1978. While he was persona non grata in the US, the acting activist had ambitions to return to America to direct a film about the 1973 shooting incident that had led to the death of two FBI agents and the - seemingly wrongful - conviction of the American Indian Movement's Leonard Peltier. This ambitious plan wasn't to come to fruition, however, as just six weeks after sitting down with 60 Minutes, Dean Reed's body was dragged from a lake just east of Berlin.

Although the coroner ruled the death an 'accidental drowning', the press seemed convinced that Reed had killed himself, perhaps in response to the sentiments expressed by his countrymen following the 60 Minutes appearance. The performer's family, on the other hand, were convinced that the he had been murdered. It's certainly possible that his Stasi bosses could have decided to terminate his employment once and for all. As Dean Reed's life came to a premature end - he was only 47 - the mystery surrounding his passing simply added another air of fascination to the man who taught the Eastern Bloc how to rock.