A Visit to the McLaren Technology Centre with Gillette

Being in awe of people that "make" things, it was a privilege to be shown around the McLaren Technology Centre recently. Nestled in the outskirts of Woking, the sprawling complex is more Bond-layer than smoke-belching factory. The tour - in partnership with Gillette - follows from a successful collaboration between the two brands. One being a nice, sharp razor manufacturer - whose product I used just last week ahead of a particularly important meeting - the other being the parent company of the most successful British F1 Team, ever. 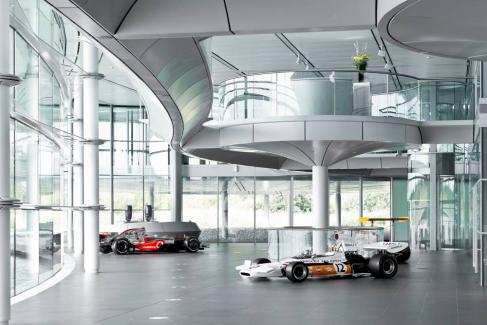 But their collaboration is why we were there and it’s something which is more founded in their cultural similarities and mission to find success in the detail. If my day at the factory is anything to go by, it's an example of opportunities only just scraping the tip of the iceberg for McLaren’s potential. Having already toured the impressive Gillette factory in Boston (#amazeballs), it was going to be an interesting day seeing how two brands that have so-dominated their industries tossed up in comparison and found a mutually beneficial product direction.

The McLaren representative we're greeted by sees us gazing at the water-feature and jokes that F1 rivals were long convinced that the giant lake hides a secret underground test-track. I am not so sure he isn't telling porkies, I can see why the rumour-mill churned that one out. The first thing that strikes you about the centre is its rarity - and that probably makes it all the more beautiful in my eyes. That may sound strange but, being a child of Thatcherism and an innovation idealist, I haven’t exactly stumbled across vast campuses solely dedicated to science, invention and manufacture that much. The UK, it seems, just has an economic hard-on for services, financiers and their economics of leverage. But it should be science, invention and people that James Dyson would respect who should be on our pedestal of policy-lust. Underlying value is the only thing that will stand the most stern test of due diligence I know of: Time. 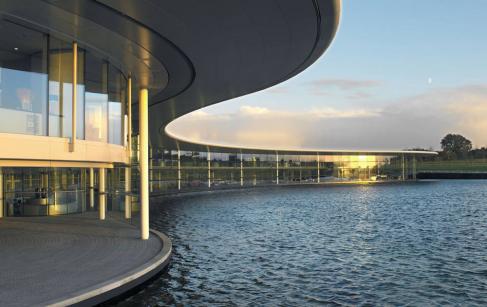 Yes, my first impulse is to storm Westminster, burst into tears of pride and demand that Mark Carney is summoned to begin flipping his quantitive easing into the coffers of the UK's R&D and science grant budget. Because from one solitary day strolling around this space-age warren of wonder, nestled into a Surrey suburb, every pound spent underwriting people of scientific and engineering disposition is worth ten times as much as others. Imagine what £600bn would have done for invention and innovation. Brunel would have descended from the heavens for another bridge, or two, for that kind of support. Instead, financiers continue pulling that cash out every six months to buy another house in some exclusive London village or heath. (Rant over.)

McLaren isn’t wholly British, though, nothing global in reach is wholly any ‘pure nationality’ these days - not in a free market. It’s owned by Ron Dennis and the largest lump by the Qatari Investment Authority.

To you, McLaren is probably a motor sport brand first and a sports car manufacturer second. Well, that’s true. But it just so happens that the first business - so advanced is its commercial intellect and problem solving skills - lends rather well to a plethora of other sectors. Ron hasn't missed that trick. And so sanctioned the overdue launch of McLaren Applied Technologies. It’s here, I predict, that the brand will truly make its mark.

You know that scene in Batman Begins where Morgan Freedman breaks out the massive secret warehouse of awesomeness? Yeah, these people are in that mould. There’s a door, we didn’t get taken through it, though, that leads to their applied division. It’s the part of the business that’s taking things learned from F1 and automotive, and taking them to other sectors. Everything from carbon fibre expertise to black-box technology is going to begin pouring out from its inner reaches. Oh, how I wish I could buy some shares from the Qatari's pot. Maybe I can convince them to crowdfund, or something. (Somehow, I don’t think they’d go for it.)

The hints of this future greatness are everywhere. Mark Cavendish’s ultralite carbon-collaboration with Specialized bikes sits in the main gallery. The tour guide ALSO drops factual bombs, like, and I paraphrase: ‘Everyone uses our stuff in motor sport.’ Not to mention the fact that they have their very own wind tunnel and a few floors to play with applying their experience to the rest of the commercial world.

As quickly as the day blew me away, it was over. I can see why Gillette would want to partner with such a brand, they are birds of a feather in many ways. Although both, I am sure, would like to see many more enterprises to compete with them - just like Will King's shaving company have latterly been endeavouring to do with Gillette. Invention just doesn't work without peers to rival and there simply aren't enough applied science businesses being fostered on these shores.

Personally, i’d like to see the UK supporting engineering and science in a far more aggressive way. When you see this place, you know it means more than just business, it’s not just economics, either. It’s inspiration, pure, unbridled, inspiration.

Go Ron, I say, your factory and business vision really is the ‘Best a man can get’ when it comes to seeing how it should be done.