House of the spirits

As shocking supernatural drama Ghostwatch returns to DVD, we celebrate phantom adventures that are so real as to be unreal.

On 31 October 1992, the BBC staged its most ambitious outside broadcast to date. Entitled Ghostwatch, the programme sought to prove once and for all whether the dead still walk among us. Hosted by Michael Parkinson and Mike Smith (who was a big noise at the time), Ghostwatch also saw Sarah Greene - children's TV presenter and Smith's marginally better half - and Red Dwarf star Craig Charles visit a supposedly haunted house in Northolt, North London. According to the Early family, they shared their house with a poltergeist called Mr Pipes. What sounded pretty far fetched at the outset appeared proven beyond all doubt when 90 minutes later, the aforementioned Pipes unleashed his awesome otherwordly powers upon the Earlys, the presenters and the viewing public.

As you might already have worked out the documentary Ghostwatch was nothing of the sort. A drama written by Stephen Volk (author of Ken Russell's Gothic) and directed by Lesley Manning (helmer of many a fine episode of Tracy Beaker), not only did Ghostwatch have a script but its cast list appeared in the Radio Times, Parky being billed as 'Presenter'. But while the production was pretty upfront about the fact it was fiction, plenty of viewers were completely taken in by Ghostwatch. Audience members in their thousands rang in to express their disgust, and in one particularly tragic instance a young man with mental difficulties was so upset by the programme he ended up taking his life. While going to great lengths to explain that Ghostwatch hadn't tried to mislead the audience, the BBC agreed not to air the drama again until 2002. That date has long since past but still Ghostwatch is yet to enjoy a second screening on British terrestrial television.

But while the show was banished to the video library - it would emerge on DVD in 2002 before being re-released by 101 Films this October - Ghostwatch's influence escaped into the wider world. While directors Daniel Myrick and Eduardo Sanchez haven't confirmed it themselves, the cast of The Blair Witch Project have confirmed that Ghostwatch was one of the films they were encouraged to watch while preparing for the project. Likewise, the creative types responsible for the Paranomral Activity movies, which use the same found footage conceit as Blair Witch, are clearly au fait with Manning and Volk's landmark production.

Of course, while all these dramas are fictional, a vein of fact runs through all of them. While the Paranormal Activity pictures are clearly influenced by the countless supernatural-themed videos that can be found on YouTube and The Blair Witch Project drew heavily upon the folklore of rural Maryland, Ghostwatch reworked elements from the Enfield Poltergeist case.

From the Autumn of 1977 to the Summer of 1978, Peggy Hodgson and her four children played host to an entity given to knocking on walls and throwing around furniture. Determined that the case be taken seriously, Ms Hodgson invited journalists to watch the poltergeist at work and summoned mediums to banish the ghost from the family home. An investigation was staged by the Society for Psychical Research (SPR) who concluded that the whole affair was a hoax along similar lines to the events dramatised in The Amityville Horror. As for those convinced that the Hodgsons have been victimised by evil spirits, their faith all but wilted when Peggy confessed to faking some - "But not all" - of the phenomena. 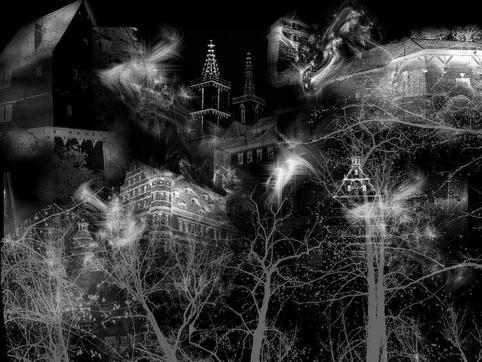 And you thought you were sober when you took it? (Image: johnxfire)

Sceptics the world over might point out that all supernatural encounters are the work of hoaxers. And if you look at how a work of fiction like Ghostwatch was able to raise merry hell, it would seem reasonable to suggest that there is something in our makeup that makes us susceptible to the notion of ghosts, ghouls and things that go bump in the night. Look at the how cinematic ghost stories such as Candyman and The Haunting (the 1960s original, not the shit remake with Catherine Zeta-Jones) reach levels rarely attained by monster movies and you understand why viewers reach for the likes of Dead Of Night and The Others when Halloween swings round. It's as the great Arthur C Clarke pointed out in his World Of Strange Powers series, "Everyone enjoys a good ghost story."

For more on Ghostwatch, be sure to check out the superb Ghostwatch: Behind The Curtains website.